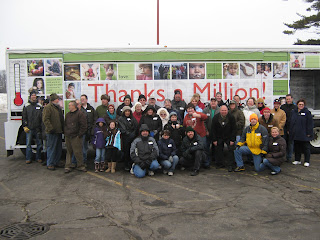 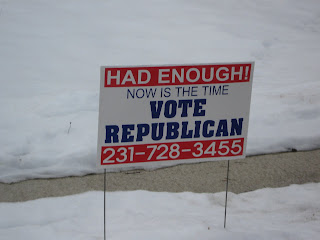 First off, I had some signs made up. 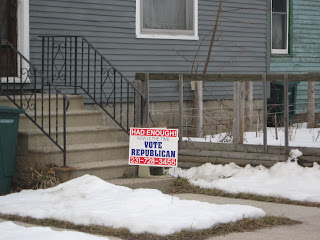 I think you get the idea. I need some help putting them up around the Muskegon County. Anyone interested give me a call. Bob Carr @ 231-728-3455. I would love to see them popping up here and there. I did buy these myself at around $14.00 @. Sherburn Sign made them up and he threw in the wires at no cost. They usually cost $1.00. I only had 13 made. If you can donate any amount it would help. But the main thing is to get them out.

A word of caution, keep them off the terrace and on - way on your property. It is not a candidate sign so I'm hoping it falls under freedom of speech. But no sense pushing it. Better yet if there is interest we could keep a sign a week then give it to someone else and rotate them so they appear to be popping up all over. lol 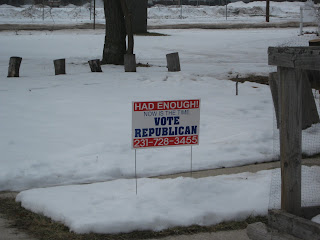 The phone # is mine; I’ll screen the calls and pass them on to the Muskegon County Republican Party if that is the wish of the caller. If we want to pull a "Boston" here in Muskegon, we will need lots of volunteers and voters to turn things around. This is my effort within my means to try to do that.

Now - on to the main topic today.

Sat. 1/23/10 a Thanks A Million food pantry truck pulled into the old K Mart Parking lot on Henry and Norton. There were 35 volunteers mainly from the Muskegon County Republican Party there to help distribute the 10,000 lbs of food to those who wanted or needed it. The Republicans co-sponsored the days event. 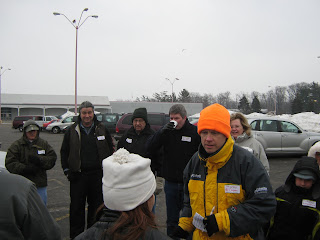 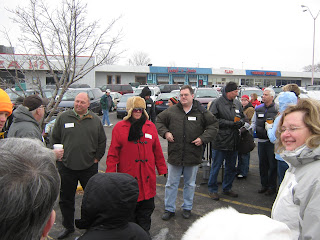 Bill Cooper is the man responsible for the Thanks a Million program. Mr. Cooper is running for the 2nd Congressional seat being vacated by Pete Hoekstra. Bill Cooper dreamed up the ambitious notion to donate to the 2nd district a million pounds of food. That works out to one hundred truck full’s. 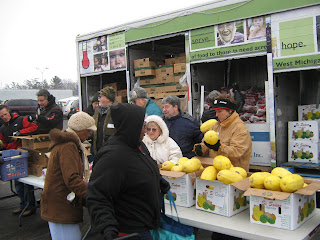 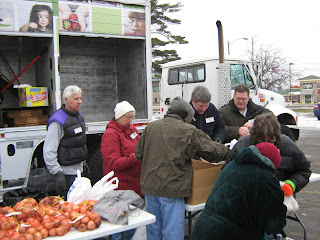 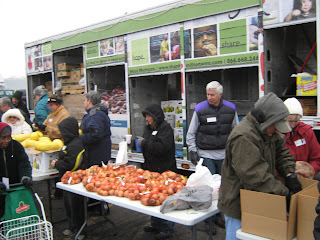 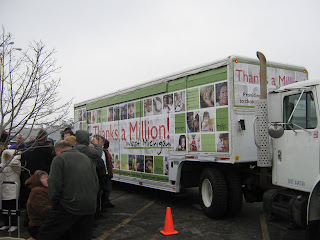 If any of you out there are thinking this is wrong because of the Partisan connection; look at it as Bill Cooper explains it. This is not a direct quote just a recap of what Bill told me.

This money would have been spent anyway during the campaign. It would have been spent on all kinds of things like refrigerator magnates with my name on it, bumper stickers with my name on it, maybe pencils or coffee cups or beer can mittens all with my name on them. Then he challenged me to see his name anywhere around. The truck as you can see he had completely wrapped with a design of his own choosing. Nope his name wasn’t to be found. The implied question was whether I thought the money he's spending on the food trucks would be better spent on the campaign trinkets.

As far as the Muskegon GOP being a co-sponsor; we are no different than any other of the co-sponsors. The main thing is that the money spent ends up in the hands of those who need it the most. Wouldn’t it be great if ½ of all campaign money up and down the ballot went to community causes such as this, I’m talking literally billions. 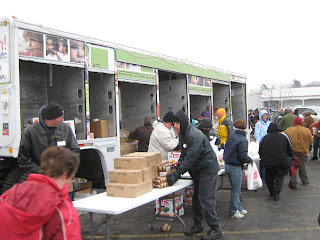 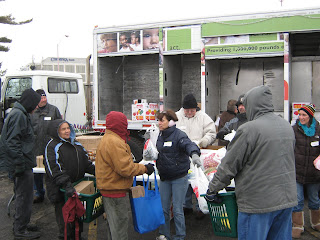 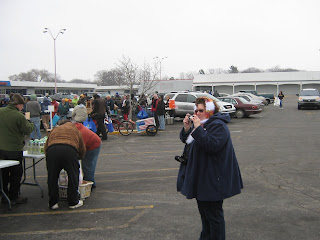 Yesterday was just one of the planned 100 stops throughout the 2nd district. 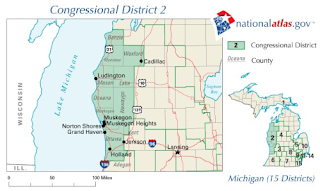 From Holland up to Benzie County and all the places in-between. Ludington, Cadillac, Hart, Freemont, Muskegon, Whitehall, and Holland – you name it and Thanks a Million will probably be there. This was my second time to volunteer for Bill and he has the system down to a science. I’ve volunteered for a couple other food trucks and while good, Bill Cooper shows off his organizational skills in the efficiency of his program.

My signs and Thanks a Million, I hope are "Signs of the Times"

Regards, Live Dangerously Be A Conservative
Posted by live dangerously at 8:44 AM