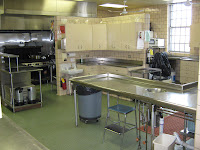 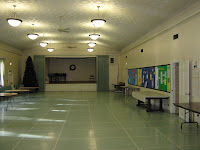 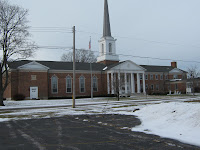 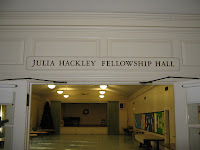 At 11am today I picked up Marion my longtime friend and leader of the Nelson Community Association. We went to his Food Pantry on Beidler and picked up six extra bottles of apple juice he had. We then went to the First Congregational Church on third St. to donate them for their Sat. morning Breakfast.

As I opened the door to the Church, I should of seen it coming. Someone else had opened a larger door for me. I have posted in the past about getting a Gleaners Food Truck as a Republican way to spread our message. I have also been looking for ways to put people to work volunteering to help the community. Well there you go.

I met two very nice people who were the hands on people in charge of running the Churches weekly Sat. morning breakfast from 9-10:30am every week. These two along with other unpaid volunteers do this every week. Today they fed 289 people what they call a “Gourmet Breakfast”.

They are a husband and wife team. Jerane and Richard McEwyn. The Breakfast was over and the cleanup almost complete by the time we arrived. We had time to talk and I could ask them questions as they unwound from their efforts.

As I’m finding out in interviewing, it is best to let the people tell you what they want. I only ask questions later to fill out the facts. During the conversation I learned that the amount of effort they put into this every week, is only surpassed by the rewards they receive by doing it.

Previously as I daydreamed of giving out a truck load of 10,000 lbs. of food I thought of all the pit falls. How could I find enough volunteers. How do you limit who comes to pick up the food? Who gets it, who doesn’t? This door I opened answered most of those questions.

The First Congregational Church’s “Gourmet Breakfast” for example lets in all who want to come. Rich, poor in-between, all color all genders all everything. They do not limit who attends by any means in, this a truly diverse effort. They too have a gleaners truck once in awhile, in which they use the same formula. They let anyone take food and what food they want to. Imagine such a thing as letting people decide what they need and how much by themselves. Novel Concept. I’d like to reinforce this “individual Freedom” concept as being a Republican mainstay. This is a perfect example of how we can do it.

Forget the two birds with one stone idea. I was resurrecting at least three and probably more with this door that was opened. I helped Marion in his food pantry pass on his need for things like paper towels, soaps of all kinds, toilet paper and the like to the Minister of the Church to get Marion on their list of people that can use the Church’s help. My plan for figuring out how to get a Gleaners Truck was helped along. The Church also received some needed Apple Juice.

As I talked with Jerane and Richard McEwyn, I learned that they also need volunteers to help serve the food for their breakfasts every Sat. What a nice way to help the community and the Republican brand if we as a Party can get some of our “hands on” to help facilitate this nice thing by the Church for the Community. I will start talking this up at our next Carmen’s Group and our Executive Meeting.

Perhaps the bird that I would like to resurrect the most has to do with the notion that whether blatant or not, political action groups and their efforts such as what I’m planning can and will be seen by the community as a benefit to that community.
The time to start making outposts in the Wilderness the Party finds itself in after our defeat, is NOW.

ps. Jerane and Richard McEwen's home phone # is 780-2193. They don't mind you calling for further info. If you want to make a financial donation please feel free also. You can imagine the amount of food it takes to feed an average of 300 people breakfast. They would be happy to hear from you. This is a voluntary non government funded organization. Imagine that.