A Michigan Democrat this time Decides Not to Run

John Cherry, Governor J. Granholm’s Lieutenant Governor, has officially declared he is not running. His stated reason is that he can’t raise enough money. The implied reason is that he can’t get the people of Michigan to believe that he would bring to the state anything different than the misery the Granholm/Cherry administration has brought here for the last 8 years.

The blind alleigence to the failed Granholm policies was summed up in the article in the following quote by Granholm.

-----quote-----
"I share the lieutenant governor's disappointment that he will not be seeking our party's nomination for governor," Granholm said in a statement. "John Cherry has been an exceptional partner in the effort to diversify Michigan's economy and create jobs, train and educate our citizens, and protect them in the process. He has provided outstanding counsel to me and leadership to our entire administration on a host of issues, not the least of which is his work on expanding higher education opportunities and protecting our Great Lakes.
---------------

John Cherry was wise to withdraw if that was the kind of misguided pie in the sky gobblygooked support the Governor was going to give him. Gee I wish Jennifer would swoop over to the West coast of Michigan and give some of that support to Mary Valentine. 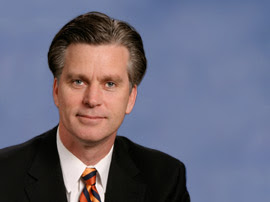 The article talked of Andy Dillon, and I think he would make the most formidable candidate for the Dems. His cross to bear however is that as Leader of the Democrat House he would bear a lot of responsibility for the mess Michiganders find themselves in. That issue will not go away; any pretenders to the throne will be tarnished by any relationship to the current governor. Andy Dillon still will probably be better equipped to handle the heat.

Ironically back on April 8th 09 I attended a “Five County Bash” in Lake County; (from around that idea I eventually formed my new website, " BottomUpPolitics.com "); at the event Terri Lynn Land our Secretary of State who was also a Candidate for Governor was a speaker and as luck would have it we were seated at the same table across from each other. I mentioned that I thought the Dems would find a way to get Cherry out of the picture. Her eyes lit up and she said, “You know that is what I’ve been thinking”. Below is the link to my blog about it.

To save time here is the part about Terri.

-----quote-----
“She has quite a varied past and an extensive political history. We hit it off when we both agreed that Cherry probably wouldn’t get the nod to run. We both saw the same polls. Terri in her speech said that Cherry has too much baggage and that got a big round of applause. She also brought up the polls which shows all four Repubs beating Cherry by 10 points.”
-------------

I also remember talking last Thursday at our Carmen Group about why in the world the Democrats aren’t challenging Cherry. Well I guess they were. Behind the scenes anyway.

I’ll be honest; I’ve always believed that anyone would be better than Cherry; now we have to wait and see who and how much better. Frankly this bothers me. Dems are looking not so much for an excuse to vote Dem, rather a reason simply to get out and vote. The importance in this off year election is huge. Just saying that “at least it’s not Cherry, Jennifer’s Buddy” about anybody else has to ease the mind of at least a few Libs. Perhaps motive a few.

I’m not overlooking the obvious Republican benefits. Prime benefit would be that who ever comes up next will have a real time disadvantage. Setting up a campaign on a state wide scale takes time. The money also will have to be collected in a shorter amount of time.

I also assume that there will be Democrats popping out of the woodwork and floating their trial balloons for weeks to come. Hopefully a crowed primary will ensue for the Dems to match the Republican one.

This will indeed be a fun and interesting primary and election season.

Regards, Live Dangerously Be A Conservative
Posted by live dangerously at 2:02 PM

Mr. Marlinga needs to forget about wasting time in the State Senate.

Cox can lose statewide because he is not from Grand Rapids.

To win a Republican must turnout money and support from Grand Rapids, like John Engler.

Cox ---- like Granholm --- is a McNamara Machine tool from Livonia.

Any Democrat from Wayne County or Detroit (Archer) will lose statewide because they are all tainted by the stink of the McNamara Machine.

Ficano is corrupt and actually worse than McNamara, because he is totally incompetent.

The Democrats only way to win statewide is with a Macomb County Democrat, such as Sheriff Mark Hackel or Carl Marlinga.

Both Marlinga and Bonoir are UAW loyalists. The UAW hates Dillon

Just like Fieger, Marlinga's past troubles could endear him to voters in the state's urban areas such as Detroit and Flint.

Marlinga the outsider with insider experience, vs. Cox the self-serving windbag.

Marlinga vs. Cox would equal a narrow victory for the Democrats.

I'd think the Republicans would pick Hoekstra, and to stay away from the Granholm Cherry Dillon mess they will pick the Lansing mayor.