Can’t keep politics out of it.

That is the reality of government. The main thing is that something gets done.
please click on pics to enlarge 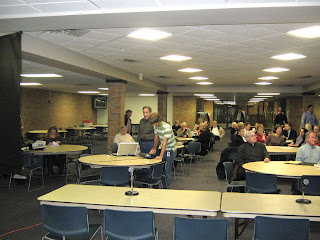 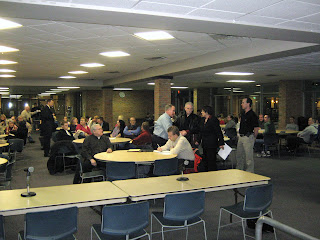 I’m talking about the proposed closing of the Whitehall office of the Secretary of State and the moving of the Muskegon Apple location to Sternberg. 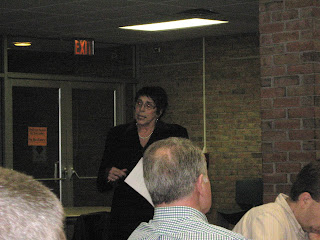 Last night State Rep. Mary Valentine (D-Musk.) held a Townhall Meeting in the Collegiate Room of the Muskegon Community College from 6:30-8:00 about that. There was a medium crowd of around 50 made up of candidates and politicos as usual in an election year but others were there as concerned citizens.

This was done to help Rep. Valentine to find out the views of her district on the subject in order for her to formulate a plan. She said at the meeting she will address the problem with legislation she is planning on writing. She mentioned that Sen. Jerry Van Woerkom has a similar plan in the State Senate.

During the Q+A I pointed out that State Rep Goeff Hansen (R-Hart) had introduced a bill (HB5722) to that effect back on Dec 18 of 09. I wondered why that wasn’t acted upon to forestall this outcome. My question was ignored and Mz. Valentine continued on about how Sen. VanWoerkhom and she would solve the dilemma.

From sources I understand that Hansen’s bill will die in the “Committee on Government Operations” for obvious political reasons. Hint. Hansen and Valentine are running for the 34th State Senate Seat. The Dems control the House where they are currently both serving.

There was a printed flyer on the table which listed some things Mary thought were inappropriate, I assume somehow they related to the SOS office closing.
The following one however leaves me wondering.

There was no explanation of that statement. Perhaps just a Freudian slip. I guess she just assumed the audience who seemed mainly made up of Democrats + Democrat candidates would understand that everything is Bush’s fault, by default. The audience seemed to me though to be interested and knowledgable about the SOS closing and I assume Mary may have assumed to little of her audience with that Bush remark.

This meeting, politics aside was very informative and worthwhile if for nothing else than getting local input. The owners of the Whitehall and Muskegon offices in question were there along with the Muskegon County Commission Chair. They all gave their side of the story and I learned a lot. I am in favor of keeping the Whitehall office open and not moving the Muskegon office. 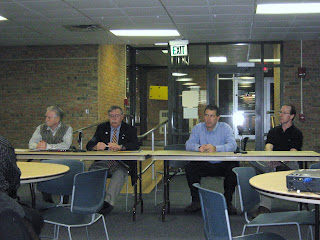 I saw Andy Fink a teacher of government at MCC who brought his class with him and for that I was happy. This was a real education in the politics of government and how in the end things actually do get done if you can cut through the agendas and bickering. I hope they learned that anyway. In fact I hope they learned that the agendas and bickering were the key to Democracy. This was a good example of how the process actually works.

The upside of the Townhall was that it sounded to me there is plenty of political capital to get this done. SOS Terri Lynn Land has already gone ahead and ok’d a rebidding to be done. That will be done by the office of Management and Budget who Mary Valentine informed us she was told will happen later, “after the dust settles”.

The audience had ideas all over the place. It seemed to me that it was plain that the Sternberg move was off the table. However that was what the most comments were about. Secondly the Whitehall closing was much argued against for all the obvious reasons. 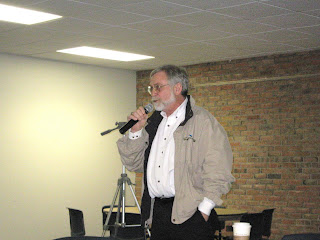 John VanWyke, brought up the idea that the figures given from the SOS for moving seemed from his experiance working at Verizon were very low and unrealistic. He joked that the cost for the phones would be more than that.

As a Conservative I appreciate the argument that “consolidation” would save money. However, when this is done by directly cutting services, it smacks of a familiar threat. I liken it to the threat local schools use when trying to get a millage passed. They seem to think the only way to save money is by cutting football. I would think the SOS could find another way.

This rebidding I hope will flush out more realistic facts both from our Sate Rep, State Sen. and the SOS.

Regards, Live Dangerously Be A Conservative
Posted by live dangerously at 9:31 AM