Time to catch you all up quick like, on what's been happening to me in my new digs. 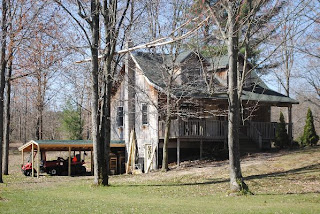 I am completely inlove with my new surroundings.

My house continues to be a work in progress, but there is progress. Inside I now have with the help of Rob L. a great butcher block counter top and great cabinets under it. The idea is to have a seperate place to store and use all the equipment needed to preserve the harvest from my garden. ie. Prepare and can or freeze it.

Also I've started making bread with a bread machine and that takes up a bunch of space for the machine and the different flours and misc stuff. The job now is to treat and finish the counter top and cabinets but they at least are in place. Downstairs a new freezer and a room remade to hold my electrical and plumbing suppliess works out nicely.

Outside the garden of course continues to get improved. Latest was the addition of 7 sprinkler heads controlled with switches to make it easier. Though my pump can only push one sprinkler head at a time, I can easily switch from one to another by flipping a switch and not have to drag hose and sprinkler around as before. 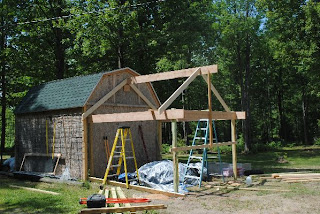 Also the start of an addition to my barn/shed is framed up but not sheathed or roofed. This will serve as a place to store excess hay and a place to start the baby chics out untill they can be put out into the movable coops. The projects are all in the process of getting done. Also bought a hoop house in the summer and it is still laying there, I guess next year will be the time for that.

I failed in buying the 2 pigs and 50 chickens I had wanted, you guessed it - next year I will do that too. The plan is thought out and the pieces for the pen and coop are already bought, like I said a work in progress but there is continual progress and for that I'm gratefull.

Now to my real love - politics. I stepped down as Tea Party Chair and Andy took up the reigns and the meetings are continuing. I have continued to go to various Tea Party and Republican meetings and helping out when I can. 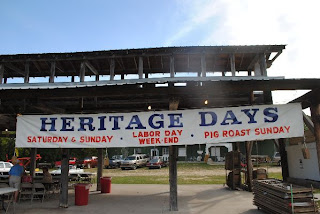 I'm trying to help out in the Community in general also, lastly I volunteered to help out during Heritage days which is a fundraiser for the Hart Historical society. First night I was the Fish fryer, the second night I along with another was the chief pig cutter upper and what a pig it was! A 300 pounder slowly cooked overnight on a BBQ grill. It was more pulling apart than cutting. The event went over well for the Society and everyone seemed happy, and as far as I know there wasn't one death due to poorly cooked food. 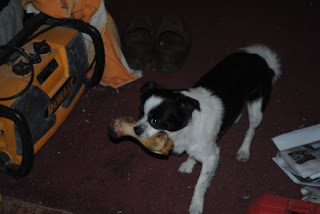 As a bonus, I got all the bones off the pig to take home. I've already made some ham 15 bean soup and my little dog was the proud recipient of a huge left over bone. 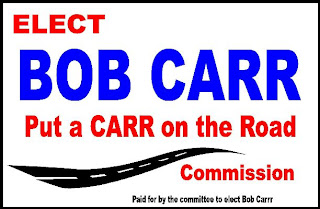 The big news I guess along political lines is that I am running for County Road Commissioner. There were two openings on the Board and only one person running. A County Commissioner talked to me about running and I agreed.

Later another candidate threw their hat into the ring as an independent. This is a coounty wide race with 3 people now running to fill two spots. A Republican (Me) a Dem. and an Independent. My plan of attack to win has been to start going to as many of the Township board meetings as I can to meet people and to hear about what they want the Road Commission to do.

As far as campaigning, I've made up business cards and just today put together my first Yard Signs. I could only afford 50 so making sure I put them along busy streets is will be necessary. With 16 townships I hope to put at least 3 in every one. I'll have to be careful as to who gets signs.

I have also started stopping by people's houses when I see them out in their yards. Hope this will be enough. I'm sure as the election draws nearer, I will get more paranoid and start working harder. Up till now I've been going to Road Commission meetings, talking with and meeting the other members of the board. I've been gathering info on how the whole thing works. I've been to several worksites and talked with some of the workers out in the garage to get their sense of what needs to be done There is a lot to learn and I'm digging in, during this calm before the storm which will be the election.

Here is an example of what I did yesterday. Went to the Muskegon County Republican HQ to pick up some free wire supports for my yard signs that I had forgotten to pick up Sat. Went up to Ludington after that to see the Mason County HQ and shop at Meijers, this was to try to get something constructive done before going to a Townhall put on by State Reps. Ray Franz and Ken Horn which I wanted to attend. Mr Horn is the head of the State House Energy committee and Ray works with him. The topic was the ballot proposal "25 25" in general and there was a lot of talk about the new windmill farm. There was alot of good inside info on how the government really works from these gentlemen and alot of info from the audience. All but one or two were against that Constitutional Amendment.  I was before I got there but picked up alot of useful info to use when argueing against it.

There is lots of other stuff I'm into and will talk about in later blogs as it comes up. One of the biggies however and perhaps the most important is that I've decided to run for the Chair of the Oceana County Republicans. I've talked with the current chair and alot of others about it and they all think it a good idea. I'm at all the events and have been for a couple of years. I seem to get along with most of the members. I do have leadership experiance with the Tea Parties here and in Musk. I've been learning alot as I go. As the Chair I would finally have the chance to put my ideas into practice. I would look forward to that.

Regards, Live Dangerously Be a Conservative
Posted by live dangerously at 4:29 PM No comments: