Five Counties Republican Parties sponsored a Italian Dinner, a catered Italian Dinner. The food was great. In a flyer they gave out there was a letter from Dick DeVoss congratulating them on the spirit of unity which the whole event was all about.

Eugene Jorissen was the master of ceremonies and he did a great job. Live auctions were interspersed between speakers; a nice break in the action. Also a nice addition to the kittys of the various County Parties.
(click on any picture to enlarge.) 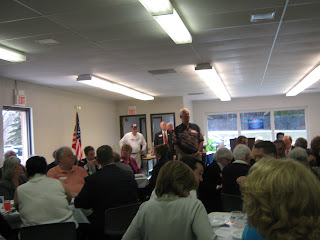 Geoff Hansen who attended recently gave some youngsters from Free Soil school a tour of the offices and actually got them on the floor of the House. Geoff and Michelle McManus helped make that trip memorable. At this dinner a couple of the students stood up and gave a nice speech about the trip; complete with pictures. If they are the new face of our party, we’re doing ok. 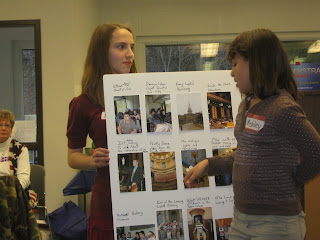 There were around 100 people there; volunteers to big shots.

Just by happenstance I sat at a table next to a young man who happened to be the driver for Terri Lynn Land. His name is Phil Kraft; come to find out he had quit college for awhile to be Terri’s chauffer. Talk about a small world, he was the guy manning the Livingston County Republican HQ when I called to find out about Marlene Shockley’s Precinct Delegate Training Workshop. That is the kind of volunteer we need more of. We got on well. Then his boss sat down and I was able to enjoy a meal and converse with Terri Lynn Land. 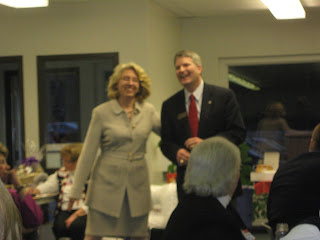 I was impressed with her. She has quite a varied past and an extensive political history. We hit it off when we both agreed that Cherry probably wouldn’t get the nod to run. We both saw the same polls. Terri in her speech said that Cherry has too much baggage and that got a big round of applause. She also brought up the polls which shows all four Repubs beating Cherry by 10 points.

To her credit most of her speech had to do with her current job as Secretary of State and what she is doing and plans to do yet. One of those things is the use of the driver license to scan and instantly stop someone from voting in other precincts.

While I’m leaning towards Pete, I’m pretty impressed with Terri. Our party has a great amount of talent. This election perhaps the public will get fed up with the promises of the Dems and look to the actual candidates and their qualifications to get the job done. With the effects of the Dems policies showing up all around us in higher taxes, higher unemployment, people I hope will look to qualifications vs party labels.

This dinner was about unity and working together. It accomplished that, at least in a small way, in a grass roots way. My Bottom Up Award goes to the 5 Parties for this effort. 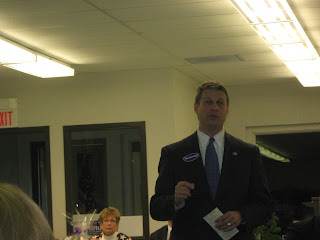 The part of Bill Huizenga’s talk about unity was impassioned. Bill also highlighted the government’s role of keeping the infrastructure up to snuff to also help business stay here and want to locate here. In that regard he talked of his efforts of keeping the waterway clear, keeping the channels dredged and open to commercial shipping.

A big part of the event centered upon the main focus which I think the Republicans are trying to get across. Business = Jobs. Helping business = net income for the state. I would add that helping business = Population staying in Michigan.

Republicans are pushing an attitude of Growth vs loss, positive messages vs negative. So far I’ve seen Pete and Terri and they both are pushing the idea that government intervention if done right can pay big dividends in jobs and income for the state. We need not control business just offer incentives as needed. In her speech Terri said, government should “help you, not get in the way”.

Bob Craig from the Dept. of Ag., gave a nice brief Power Point to highlight how some intervention and help through the Ag Dept has increased jobs and state income in the Ag. Industry. I’ll highlight a couple of facts that in this dire economy jumped out at me.

Gerber has added 200 jobs and invested $75 million in their Freemont plant.
Kellogg added 300 new jobs in research and development and plans on investing $54 million over the next decade.

There were many others.

The size of the Ag Industry seems tied with Tourism. Sandy Crandall gave a rather lengthy report on that.

The party was informative, and did what it was meant to do; help the contiguous counties mingle, network and share information. Everyone there seemed to be exchanging cards and emails. A flyer for example was handed out for upcoming Lincoln Day Dinners.

Regards, Live Dangerously Be A Conservative.

PS. A speaker talking about our “adopt a precinct” program would have fit right into this. A golden opportunity was missed. I’m going to call Terry Reid right now and see if this can be set up for the future. Set up for the Lincoln Day Dinners above for starters. I may not be a good speaker but I will volunteer if necessary. In this way I will follow what is written in my header of this blog “What Can I Do Today?”
Posted by live dangerously at 12:31 PM